He further adds “Uday Bhan as a character is really challenging and exciting. The director Om Raut and I had a lot of discussions on the vibe and personality of the character. We wanted Uday Bhan to be neither stereotypical nor obvious. He is menacing, but not caricaturized.”

“The challenge and joy of doing costume design, is transforming an actor that the audience knows and identifies with, into a new character, which helps tell the story better and more convincingly,” Barve notes. Khan is playing the antagonist, Udaybhan Rathod, based on the life of Tanaji Malusare, a 17th-century Maratha military leader. It also features Ajay Devgn and Kajol in lead roles. 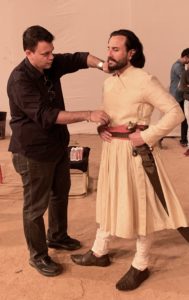 “The colour palette of muted greys, charcoals, ebony and indigo emerged from the personality of the character, and Saif being so stylish definitely added to the look,” said Mumbai-based Barve. “The colour palette has darker hues in a certain part of the film and lighter hues in another part. Kinkhwab, Brocades, kantha stitching, crushed silks, baroque Velvets, cutwork and even rich dupion are some of the fabrics used.”

On the research that went into it, the designer said that he approached the process with emphasis on research and authenticity, and rather than looking at the cinematic references, went to the source — museums, old paintings, sculptures, textile samples, leatherwork archives. 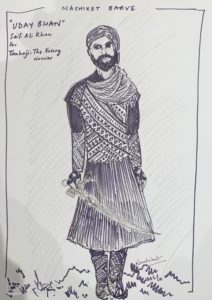 The costumes worn by Uday Bhan in the film follow his character graph through the story. “They have influences from across India and the silk route. There are influences from Rajasthan, from Mughal costume, from clothes worn by nomadic tribes as well as costumes from Indian royalty.

“The armour created for him was intricately crafted from tooled leather. I trained specialists in the craft and we came up with the design after many months of experimentation. We had a specialised team of Pagdi and Safa craftsmen who would tie his headgear realistically on set,” he added.

Barve has also conceptualised the costumes of all the cast, and says he has done a lot of layered silhouettes, as was the custom in those times along with specialised headgear and footwear.
The ace designer is also all praise for Saif’s enthusiasm for fashion while working on the film.

Barve said: “Saif is very knowledgeable about clothes and understands and appreciates craftsmanship. He was so wonderfully enthusiastic and welcoming about the process and even shared some of the archival jewellery from his ancestral collection for references. He believed in the vision that Om (Raut) had carved out for him and trusted my interpretation of the character. Whether it was wearing heavy metallic armour or really layered textiles, he was gung-ho about it.”